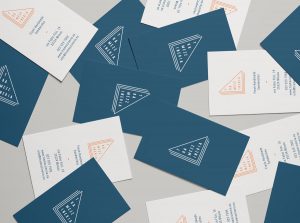 “Being a sandwich shop in Milan, the name “Tramezzineria” was coined to describe  a store of tramezzini which means sandwiches in Italian.

“Tramezzino is a soul food for North Italian but the client also wanted to attract new customers such as foreign tourists, since the location was close to the central station.

“Triangle shapes are used to make the meaning understandable, while the colour palette adds a kind of novelty to differentiate the shop from other traditional competitors.”